We have a system in the UK that allows people who can no longer manage their financial, welfare or health affairs to nominate somebody else to act for them — often a family member.

Some six million of us have completed such agreements, using a document called the Lasting Power of Attorney (LPA). In principle, it does the job. In practice, it is often a cumbersome machine that imposes on the unfortunate attorneys costs, delays and bureaucratic frustration.

In particular, banks and other financial institutions often tie attorneys in knots as they struggle to sort out a problem for an incapacitated and often elderly relative.

This needs to improve. So do the rights of redress of attorneys who have no easy way to protest to the Financial Ombudsman, the main arbiter for the financial services sector.

The government is rightly considering ways of streamlining the system and allowing processes to be handled online instead of on paper. With the population ageing, and the number of elderly people with incapacities growing, it is not a moment too soon.

An LPA allows anyone you choose over 18 to make decisions and manage your money and property if you no longer can. This can involve anything from buying presents for grandchildren to selling the donor’s home, buying and selling investments and dealing with tax. 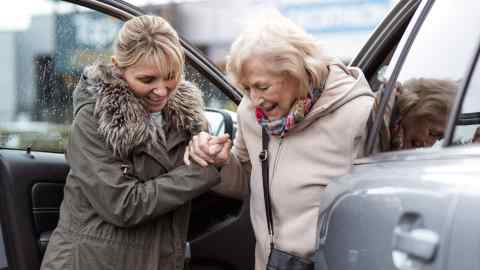 I have an LPA for a relative in his eighties. He is mentally and physically fit and well but knows he may not always be so. My sons have LPAs for me and my husband. It is a precaution in case the worst happens. Incapacity can strike at any time: a road accident, a stroke, a degenerative illness.

But research by Lloyds Bank published this month shows that 80 per cent of people over 55 have not appointed anyone as their attorneys. That needs to change.

Unfortunately, registering an LPA with the Office of the Public Guardian (OPG) is awkward. Getting banks and other financial organisations to recognise you are legally authorised to deal with the donor’s affairs often takes months.

The OPG recognises the system is not fit for purpose. It currently takes an average of 20 weeks to get a LPA registered and for the donor to receive a stamped copy of the legal document.

To gain control of the donor’s finances the attorney needs to provide certified copies to each financial organisation for every account, insurance policy and financial product the donor has. These require that every page of the document is signed and dated by the donor, a notary or solicitor. Each page must carry the words: “I certify this is a true and complete copy of the corresponding page of the original lasting power of attorney.”

The OPG says: “We acknowledge the process needs modernising. That is why we launched a consultation to make the system quicker and simpler to use, harnessing new technologies to safeguard against abuse and introducing a digital way to create an LPA, while maintaining a paper option for those that need it.”

The Ministry of Justice intends to publish the government’s response to the consultation this spring.

In the meantime, difficulties continue. One FT reader is the attorney for his sister, who has savings of £600,000. He needed to get around 10 copies of the LPA document — running to a dozen pages each certified by his solicitor for a fee.

He endured delays of more than six months when transferring three individual savings accounts and gaining access to bank and building society accounts.

Finally, he filed a complaint to the ombudsman. He estimated that dealing with the financial institutions — including the hours spent hanging on the phone and having his calls cut off — took around 10 working days.

But, shockingly, he was told that he was not entitled to any compensation. Why not? Because he was the attorney and not the investor.

The ombudsman said: “The delays and poor service didn’t impact the investor.” The reader said: “Attorneys are not on an equal footing with the person holding the investments when it comes to the ombudsman service.”

They included several cases where banks refused joint mortgage applications because one of the joint borrowers was an attorney for the other. This stopped one attorney taking out an equity release loan to pay the fees for his wife’s care home.

Several cases involved refusals to issue a second debit card on an account or to send the attorney bank statements. One bank cancelled a card being used by an attorney.

The FT reader had estimated that the 10 days he spent chasing financial companies would equate to £4,000 of his normal earnings. It was not disputed that the fund manager had made mistakes. The company volunteered to pay compensation of £650 after the ombudsman’s ruling.

The reader found that many financial institutions did not understand the system. “They frequently said ‘Can you just put your sister on the phone?’ even though the LPA removes the need to consult the donor. They also expect that you live together, even though I am 250 miles away.”

One bank insisted that he travelled to her branch, but it agreed to pay £400 compensation for the journey when he complained. “All the institutions presented difficulties, but the larger ones were worst.”

UK Finance, the banking trade body, said: “We recognise the challenges that some face and that the current process to establish a lasting power of attorney needs modernising.”

The banks currently face no consequences for treating attorneys badly. Financial institutions should have a common code of practice with agreed compensation rates. And most importantly, the Ombudsman should treat attorneys as fairly as they would investors. After all that is what being an attorney is all about.

AgeUK has a detailed guide for financial attorneys.

Lindsay Cook is co-author of “Money Fight Club: Saving Money One Punch at a Time”, published by Harriman House. If you have a problem for the Money Mentor, email money.mentor@ft.com

Born In Second Half Of 1949? Act By April 1 To Avoid RMD Penalty