Stay or sell? Russia’s war shows the difficulties of nuance in responsible investing


Depending on who you believe, the horror of Russia’s invasion of Ukraine has thrown a curveball at the ESG movement or been a coming-of-age moment for the ideals that underpin it.

Either the notion that investment dollars focused on environmental, social and corporate governance can help change the world for the better has been revealed as hopelessly exposed to shifting priorities during a fast-moving international crisis. Or the idea that companies should pay heed to concerns around the planet, people and governance as well as to the priorities of their shareholders has triumphed, or at least turned out to be more embedded in corporate life than anyone really supposed.

The reality is that both versions can be true.

The corporate response to Russia’s invasion of Ukraine has gone further, faster than most people expected. In the aftermath of Russia’s invasion, many doubted that the international oil and gas groups would cease operating in the country, despite being interwoven with state-owned groups and individuals with links to the Kremlin.

There was considerable uncertainty that sectors less obviously entwined with the Russian state would take action. But the withdrawal of the energy companies (or most of them) has been followed by a slew of consumer goods, professional services, financial, technology, automotive and manufacturing companies stopping sales, closing shops or pulling out altogether.

You can argue whether ethics, logistical headaches or fear of legal risk was the motivating factor: quite possibly a combination of the three. Uniqlo blamed “operational challenges” for a reverse ferret after insisting it should keep selling Russian customers the clothes they need. Tobacco company BAT took two days to change course, shifting from continuing operations but suspending investment to a total exit with a downgrade to its growth outlook.

But the exodus from Russia, under pressure from employees, customers and politicians, does fit with a version of stakeholder capitalism, or the idea that the longer-term flourishing of an enterprise rests on more than the near-term considerations of its shareholders. (It is more reason to overhaul outdated UK corporate law that embeds shareholder primacy.) 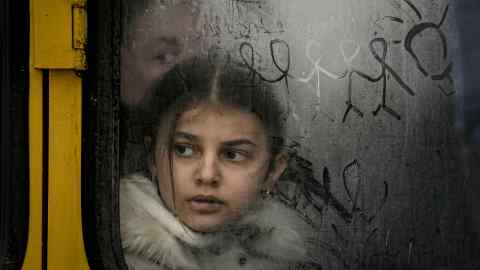 Fundamentally it has shone a light on the near-impossibility of devising the criteria investors should use to draw red lines.

“ESG ratings and scoring have always been a type of box ticking,” says Peter Taylor, an adviser to institutional investors on ESG, who argues these ratings have always struggled to analyse, say, corruption risk. “It’s also easy to exclude whole categories of companies because they’re bad, or include them because they’re ‘good’, regardless of corporate behaviour.”

Hence the challenge from a crisis that upends assumptions about the costs and benefits of domestic fossil fuel production, or the merits of investing in defence companies for society. Or that raises issues requiring better, more nuanced consideration than that provided by the pumped in figures from an external data provider.

The problem, says Sasja Beslik, a sustainable finance expert, is not just that this data was flawed (and inconsistent) in terms of its capturing of the risks. It was largely taken at face value because “the industry was looking for scalable and cheap solutions”.

This is a variant of the debate between divestment (quick and easy) and engagement (long and hard) that has occupied the world of sustainable investing for years. Reducing ESG and business ethics to a kind of first-year undergrad, utilitarian framework that weighs and measures the world in a stop-go system may be helpful for selling funds, or corralling reluctant stockpickers.

But it doesn’t manage nuance well. And it doesn’t capture the broader expectations that politicians, employees and the public now clearly have of investors and companies alike.