Over my lifetime I have been on the receiving end of more than 50 takeovers or moves to take companies private, including Pifco, Friedland Doggart, Breedon, Delcam, Trafford Park Estates, Wintrust, and more recently Tarsus and Charles Taylor. In many ways I would have preferred continuing independence and growth, but takeovers, usually at significant premiums to prevailing prices, provide liquidity to reinvest and compound.

In equity, I think employees should be given a proportion of the takeover consideration, but it is not easy to see how this could be structured or implemented. One never knows when a bid may arise — and that is why I usually remain fully invested. You ain’t going to win the lottery if you don’t buy a ticket!

Last year there were no takeovers among my holdings, but this year has already brought a US bid for Air Partner, an air charter broker and aircraft services company, at a 50 per cent premium. I have been aboard since 1999 and it has been a somewhat turbulent ride.

Shareholders who sold just before the announcement will feel sore at missing out, but I concede it is not easy for a board to decide on timing and there is no evidence to show negotiations were very protracted. 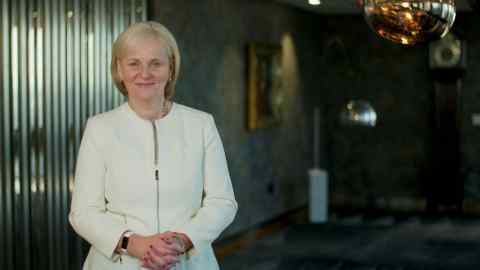 Some investors believe the bid is too low, but it is not an easy business to value. However, for me it represents a sizeable holding, hopefully delivering back over 10 per cent of my current Isa value. This substantial liquidity should be augmented by capital and special returns from my Aviva and Tate & Lyle holdings, thus giving reinvestment opportunities at the aforementioned lower levels.

Since arriving as chief executive, Amanda Blanc has transformed Aviva, selling several major overseas operations, streamlining the business and taking out costs. This week saw the results of her efforts — excellent figures, a capital repayment and a dividend boost.

For a long time, I have been surprised at the low rating given to Tate & Lyle. True, it is not an exciting performer but solidly profitable and generating plenty of cash. I first bought at 677p in August 2020 — its shares are now at 750p in anticipation of a splitting of the business, designed to free up its faster growing healthier ingredients business which should command a higher rating.

Turning to portfolio activity, I am particularly pleased with a new issue, Facilities by ADF, although I only bought a small holding at 55p on the first day of dealings. They are now nearer 80p. The company provides a rental range of the trucks and trailers used by actors, make-up artists, technicians on location and sets for the burgeoning content creation sector in the UK and Europe.

In public companies, the relationship between chief executive and finance director is crucial. Thus, I follow board changes closely

Few have appreciated the scale of investment in developing and upgrading studios — an estimated £1bn, according to the British Film Institute, in sites like Shepperton and the new Sky Studios Elstree, with total UK studio space planned to exceed that of Los Angeles.

It is against this background that I have substantially built my holding in Vitec, a global video and photographic equipment company. It has just announced a name change to Vivendum (Latin for “that which must be seen”) alongside excellent results and a big dividend bounce. I have every confidence that this should turn out to be a very profitable holding.

In the UK, power in government lies in the axis between the prime minister and the chancellor of the exchequer. In public companies, the relationship between chief executive and finance director is crucial. Thus, I follow board changes closely.

Three of my important holdings have recently appointed new financial directors. At Cerillion, Andrew Dickson, formerly of Vitec, has joined; Kim Garrod, formerly of Qinetiq, has taken up the role at Concurrent Technologies; and Treatt has appointed Ryan Govender, ex-Associated British Foods.

These three would not have joined their respective companies had they not believed that their new employer could deliver both career satisfaction and personal financial rewards.

Govender describes Treatt as “a business which has made extraordinary strides in recent years and has so much potential for the future”. As this is my largest holding, I trust he is right.

The effects of inflationary fears and the horrors of Ukraine on highly priced market favourites have brought about a fall in value of nearly all portfolios.

While this is never pleasant, I am firmly of the view that investors should keep their nerve and stay aboard high-quality holdings. Indeed, lower markets present ever better long-term buying opportunities in UK equities, which are generally accepted as being cheap in international terms.

Lord Lee of Trafford is an active private investor and author of “Yummi Yoghurt — A First Taste of Stock Market Investment”. He is a shareholder in all the companies indicated.