Wheat and other grain prices have soared since the Russian invasion of Ukraine. But those prices are not an adequate picture of the problems with losing Ukrainian grain exports.

The disruption of grain exports from Ukraine and Russia through the Black Sea will probably lead to physical shortages of food in the world, particularly for countries dependent on those supplies.

If the war is prolonged, it will impact millions of people living in places such as Egypt, Tunisia, Morocco, Pakistan and Indonesia. That could have political consequences. Local and imported grain shortages have been cited as one of the causes of the 2011 Arab Spring uprisings, as well as the Syrian civil war.

It is all a reminder of the historic importance of Ukraine’s grain production. Evidence from the Nuremberg war crimes trials show the prospect of grain and grain lands were a big part of German motives for attacking Ukraine in 1941.

And Lenin is credited with saying: “Wheat is the currency of currencies”. Even in the middle of the cold war, in 1974, the Soviet Union had to arrange and pay for huge wheat imports from the US.

According S&P Global Platts, Russia and Ukraine together were projected to export 60mn tonnes of wheat in the crop year of 2021-2022. All Ukrainian wheat exports, and most Russian exports, pass through terminals along the north shore of the Black Sea.

It is not certain when Black Sea ports can reopen. Ships are not available for chartering, and even if the owners were willing, insurance would be unavailable.

Americans, as expressed in campaign commercials, think their country is the breadbasket of the world. That was true, in part, for a while. But in the 2021-2022 crop year, the US is forecast to export 22mn tonnes, less than half the Russia/Ukraine total, according to S&P Global Platts. Canada should export about 15.2mm tonnes and the EU 37.5mn tonnes.

Worse, given the effects of the war, the wheat carry-over — what’s left from past crops — is expected to be the lowest in at least five years, and by some accounts the lowest since 2008.

According to the US Department of Agriculture’s November World Agricultural Supply and Demand estimate, the carry-over is estimated to be 16.19mn tonnes by June 2022. That is not enough to offset the Black Sea shortfalls, even it were all available.

Russia has rail links east to China and smaller ports in the Baltic and Arctic. These are not as economic as shipping through the Black Sea, but the alternative routes could make a difference, especially to ensure its ally China does not go short of grain. 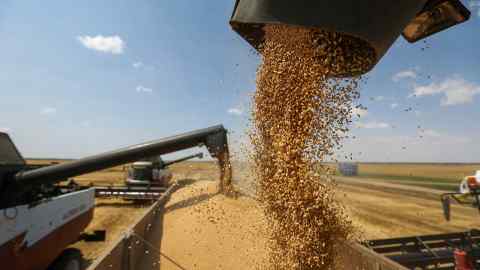 In the next weeks and months, North African and Asian countries that depend on Ukrainian grain will be hoping the international community settles the Russian war quickly and that transport infrastructure and grain terminals are not sabotaged.

Droughts in countries such as Iran, Syria, Iraq, Turkey, and Egypt have added to shortfalls in global wheat production.

Some would suggest that other grain producing areas could simply plant more to offset the loss of Black Sea exports, but that would take time and be dependent on readily available fertilisers.

If European authorities consider restricting heavy industrial users of natural gas, as they already did last autumn, they should probably set aside some gas for nitrogen containing fertiliser production. Otherwise European grain production will decline.

Schwarzman received $1.1bn in income at Blackstone in 2021

Inflation and the economics of belonging