Mortgage lenders put up rates across a swath of home loans this week, in the latest sign of expectations of inflation-driven rate rises to come at the Bank of England.

Santander, NatWest, TSB, Royal Bank of Scotland, Virgin Money, Yorkshire Building Society, Accord and the Co-operative Bank were among lenders to lift mortgage rates by as much as 0.6 percentage points across a selection of residential loans.

Santander added up to 0.5 percentage points to interest rates on a number of its mortgages, leaving its cheapest two-year fixed rate loan for those with a deposit of 25 per cent at 1.89 per cent, with a fee of £999. Yorkshire Building Society raised rates across its range by as much as 0.63 percentage points.

Aaron Strutt, product director at mortgage broker Trinity Financial, said lenders were “anticipating another base rate rise” but also coping with high demand for mortgages for purchase and remortgage as home movers and borrowers attempt to lock in low rates.

Strutt said: “A lot of people are worried about what’s going to happen to their mortgage as rates rise. Lenders are also incredibly busy, so some of them are trying to reduce the number of applications that they get while they catch up with the backlog.”

The Bank of England raised its main interest rate in December from 0.1 to 0.25 per cent and earlier this month from 0.25 to 0.5 per cent — the first successive rises since 2004. Markets expect the Bank’s efforts to curb inflation, which hit 5.5 per cent in January, to lead to further rises this year.

Average mortgage rates on two-year fixed-rate deals across all loan-to-value ratios have risen from 2.44 per cent to 2.61 per cent from the beginning of February, according to finance website Moneyfacts.

Eleanor Williams, finance expert at Moneyfacts, said: “There have been a variety of updates from lenders across the mortgage sector recently, fuelling rises across the majority of the average fixed rates as providers revise their product ranges and a number withdraw selected deals from the market.” 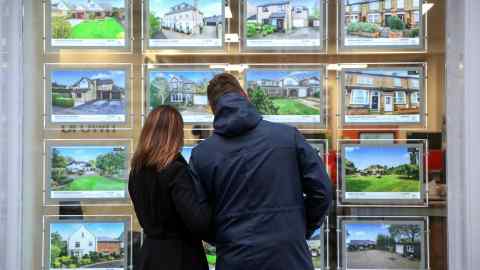 Mortgage brokers said borrowers looking to fix a rate were having to reassess the leisurely approach that many had adopted over the past few years of ultra-low interest rates. Mark Harris, chief executive of SPF Private Clients, said that when lenders were competing hard on rates, people could afford to wait. Now the upward movement on rates was forcing them to take action before lenders pull deals and replace them with more expensive options.

“I’d suggest the bottom on rates has been and gone. That is making people come to a decision,” he said.

Housing market activity remains buoyant, with property website Rightmove this week reporting that strong demand for homes in London in February and a shortage of stock was pushing up asking prices.

Brokers said demand for purchase as well as remortgage deals remained high after a big surge in activity last year. Leeds Building Society on Friday reported its busiest-ever year for mortgage applications in 2021, with gross lending reaching a record £4.4bn.

But some brokers said lenders may rethink the way they assess borrowers’ affordability as pressure grows on household finances amid a cost of living crunch. Energy bills are rising fast, while rail fares and national insurance contributions are set to rise in the next two months.

Nicholas Mendes, mortgage technical manager at broker John Charcol, said: “With several lenders, affordability is based on income rather than considerations in the costs of living. But, as the costs continue to escalate, we could see lenders exercise caution and start to consider other factors to ensure the mortgage remains affordable.”