The UK’s largest higher education union has pledged to escalate industrial action at universities, after employers passed pension reforms that could cut retirement benefits for tens of thousands of staff by a third.

The negotiating committee of the University Superannuation Scheme, the sector’s pension provider, on Tuesday voted through changes that employers said were necessary to prevent the scheme becoming “unaffordable”.

The changes, secured by a deciding vote from the committee’s chair, have angered the University and College Union, which represents higher education staff.

The union will meet on Friday to discuss their next steps, including re-balloting for strike action or calling a marking boycott that could deepen disruption for students and pay deductions for staff.

The decision marks a turning point in a long-running and increasingly bitter dispute over pensions in higher education, one of the few remaining sectors where private employers still offer traditional guaranteed retirement benefits.

The pension scheme has been at the heart of university staff grievances over the past decade due to repeated attempts to reduce the generosity of benefits.

UCU last year estimated the impact of the proposed cuts would see a typical lecturer lose 35 per cent from their retirement income, rising to 41 per cent for some, and retirement benefits cut for all staff.

Jo Grady, UCU general secretary, on Tuesday said university vice-chancellors had “chosen to steal tens of thousands from the retirement income of staff”, a decision that would diminish higher education and force staff to leave the sector.

The changes, which will come into force from April 2022, will drop the salary threshold at which members stop receiving defined, or guaranteed, pensions benefits from £60,000 to £40,000; benefits will also build up at a slower rate.

“This is a deplorable attack which our members won’t take lying down,” Grady said. “If these so-called leaders of higher education thought this was the end of this dispute, they have another think coming.”

Staff at more than 60 universities are this month participating in 10 days of walkouts over pay, workload, precarious contracts and pension cuts. 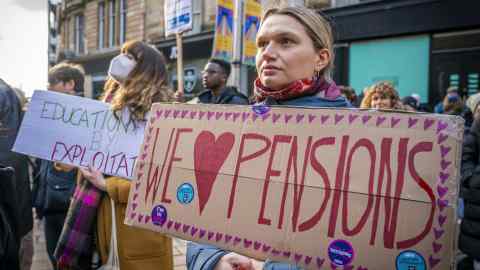 At the start of the pandemic in March 2020, a valuation of the pension plan identified a £14.1bn funding deficit. However, the USS confirmed last week that the deficit had shrunk to £2.9bn following a rebound in markets. These figures assumed employers’ proposed cuts would be applied to benefits.

A UCU counterproposal called for temporary increases to employer contributions, while a new valuation of the scheme was carried out, which was rejected by employers following a consultation by Universities UK.

Universities UK, the employer body, said the decision was an “affordable solution” and that without the changes the costs for employers would have risen to “unaffordable levels”.

“Today’s decision brings a considerable period of uncertainty to an end and gives stakeholders an opportunity to break the cycle of disagreement and dispute ahead of the next valuation,” Universities UK said.

Why Your Retirement Plans May Fail On Any Given Tuesday