Caxton Associates, one of the world’s oldest and best-known macro hedge funds, is raising its fees and preparing to shut one of its funds to new money as it reaps big gains from bets on surging inflation and higher interest rates.

The London-based firm, which was founded by US billionaire Bruce Kovner in 1983 and is now headed by Andrew Law, has more than doubled its assets in a little over two years to more than $11bn — helped by record gains in 2020 and further profits at the start of this year. As a macro fund, Caxton wagers on moves in bonds, currencies and other assets, which can be influenced by economic and political events.

Caxton is now raising the management fee on its flagship Global fund from 2 per cent to 2.25 per cent, while it increases the vehicle’s performance fee from 22.5 per cent to 25 per cent, according to investor documentation seen by the Financial Times and a person familiar with its plans.

It is also changing the Global fund’s liquidity terms in order to limit the amount that investors can withdraw every quarter. In addition, Caxton is planning to shut its Macro fund, personally run by chief executive Law, to new money to avoid it becoming too large and potentially damping returns.

Such steps put Caxton at odds with much of the wider $4tn hedge fund industry, where fees have been falling for years. They also underscore the power wielded by a small number of big-name funds that have delivered strong gains in recent years.

Average management fees across the industry stand at 1.36 per cent, while performance fees are 16.17 per cent, data group HFR said in December, the lowest level on record. 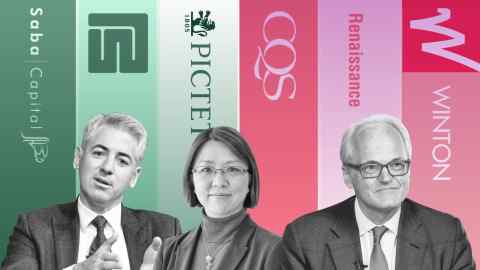 In November the FT reported that Israel Englander’s Millennium Management, which manages more than $53bn in assets, was returning about $15bn to investors and raising money in a private equity-style format, as it shifts its asset base towards longer lock-ups.

Limiting when investors can withdraw their money means that hedge funds are less likely to have to sell positions during tough market conditions, when prices may not be as favourable.

Caxton has enjoyed particularly strong gains during the pandemic and is now profiting from a belief, held for some time, that inflation was set to surge. At the end of 2020 the firm wrote in a letter to investors that “the stage may well be set for a great reflation”.

The firm has profited from inflation-based trades in short-dated bonds, commodities and so-called value stocks, which are seen to trade at a discount relative to their financial prospects.

Caxton’s gains come during a challenging period for many macro funds. Last year a number of funds were caught out when they bet that longer-dated bond prices would fall faster than those of short-dated bonds.

Such “steepener” trades proved highly painful, as did positions in short-dated bonds, when those securities started selling off sharply as traders cranked up their expectations of a more aggressive move by the US Federal Reserve towards monetary policy tightening.

Our weekly inside story on the movers and shakers behind a multitrillion-dollar industry. Sign up here

Focus Closed 38 Deals in 2021, as It Eyes Further Growth Overseas