The UK universities’ pension scheme has set new interim targets for reductions in carbon pollution to spur progress towards achieving a goal of net zero greenhouse gas emissions across its portfolio by 2050.

The £82bn Universities Superannuation Scheme, the UK’s largest private pension fund by assets, will measure the carbon intensity — emissions as a percentage of its assets under management — of its portfolio relative to a 2019 benchmark to assess progress towards net zero.

“The targets are a statement of intent and give us important staging posts against which to measure our progress,” said Bill Galvin, USS group chief executive.

However, it will not target reductions in absolute emissions as its future assets are expected to grow, a decision criticised by Ethics for USS, a coalition of academics that campaigns for the pension fund to take urgent action in response to climate risks.

“USS should be targeting cuts in absolute carbon emissions,” said Paul Kinnersley, emeritus professor at Cardiff university and a member of Ethics for USS.

The threat of catastrophic climate change has led a growing number of governments, companies and pension funds to sign up to net zero by 2050 but activists are demanding that institutions establish short-term targets to accelerate the fight against global warming.

USS said last month that it would achieve an immediate cut of 30 per cent in carbon emissions on a $5bn portfolio of developed market equities by shifting it to a new climate transition benchmark which has been developed in partnership with Solactive, an index provider.

The passive portfolio, which will be managed by Legal & General Investment Management, will overweight companies that can demonstrate they are on the path to reducing greenhouse gas emissions while also eliminating companies that do not meet the UN Global Compact’s sustainable development goals. 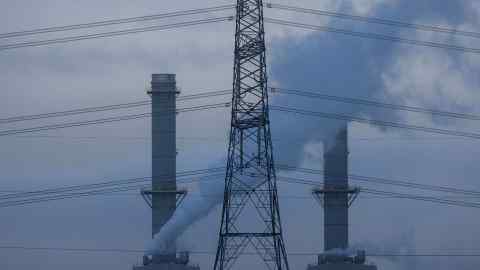 USS has also created a £500mn sustainable growth mandate that will invest in privately owned businesses that are developing technologies and services to advance decarbonisation efforts globally. The fund will split the mandate between its in-house private markets team and external managers.

An initial investment has been made in an electric vehicle business via the Rise Climate fund run by TPG, the $109bn US private equity manager which completed an initial public offering on the Nasdaq exchange in January.

“We hope these announcements will give confidence to our members and other stakeholders of the seriousness with which we are treating decarbonisation,” said Galvin.

USS has also added to the holdings in its renewable energy strategy where assets have grown to about £1.6bn, after it spent about £200mn last year to acquire a 50 per cent stake in Bruc Energy, a developer of solar photovoltaic farms that is also expanding into wind power developments.

Ethics for USS said that USS should stop funding new oil or gas projects by refusing to buy any new bonds issued by fossil fuel companies. “We hope that this next step is taken shortly,” said Kinnersley.

Simon Pilcher, head of USS’s investment management arm, said the fund’s fixed-income teams would be expected to “take a share of the burden” of achieving the carbon reduction targets.

“We will need to work closely with industry peers, regulators, governments and many others to achieve net zero,” he said.

FirstFT: Scholz to warn Putin of western resolve on Ukraine

How to fund your MBA studies