Carmakers have temporarily shut down plants in the US and Canada after truck drivers protesting against Covid-19 vaccine mandates blocked critical border crossings, cutting off the flow of auto parts and other goods between the countries.

The Freedom Convoy protests, which converged last month in Canada’s capital Ottawa, have spread to the Ambassador Bridge that connects Detroit in the US and Windsor, Ontario, where traffic was snarled for a fourth day on Thursday.

The disruptions illustrated how the demonstrations have ballooned in recent weeks beyond Canada’s borders and affected commerce with its North American neighbour and most important trading partner.

The coronavirus pandemic has rendered supply chains prone to disruption and carmakers warned the protests could further exacerbate component shortages that have plagued them in recent months.

General Motors said its plant in Lansing, Michigan, which makes Chevrolet and Buick SUVs, cancelled its second shift on Wednesday and its first and second shifts on Thursday because of parts shortages. GM said it was working with suppliers to mitigate the situation.

Toyota stopped production at its three Canadian plants and a factory in Kentucky, saying it expected the disruptions to last through the weekend. The Kentucky plant, Toyota’s largest in the world, builds models including the RAV4 crossover and Camry sedan.

Ford, which was running two plants in Ontario at reduced capacity on Thursday, warned that supply chain bottlenecks between the US and Canada “could have widespread impact on all automakers” if the disruption was not resolved quickly.

“This interruption on the Detroit/Windsor bridge hurts customers, auto workers, suppliers, communities and companies on both sides of the border that are already two years into parts shortages resulting from the global semiconductor issue, Covid and more,” Ford said.

Stellantis, whose brands include Fiat, Jeep and Ram, said that while all its North American plants were running, some in the US and Canada had cut their second shifts short on Wednesday night because of “parts shortages caused by the closure of the Detroit/Windsor bridge”.

“The situation at the Ambassador Bridge, combined with an already fragile supply chain, will bring further hardship to people and industries still struggling to recover from the Covid-19 pandemic,” Stellantis said in a statement.

The Biden administration on Thursday urged Canada’s government to use its federal powers to end the truck blockade. The White House said Alejandro Mayorkas, secretary of homeland security secretary, and Pete Buttigieg, transportation secretary had spoken with their Canadian counterparts and urged them to help resolve the stand-off.

“US and Canadian border and customs authorities are working with great urgency to ensure the continued flow of goods and services across our international border, leveraging alternative land routes, as well as air and sea options,” the White House said in a statement.

The US Chamber of Commerce, the National Association of Manufacturers and the Business Roundtable issued a joint statement on Thursday urging a resolution to the border disruption, which it warned was “adding to the significant supply-chain strains on manufacturers and other businesses”.

More than $300mn in goods cross the Ambassador Bridge every day, about a quarter of all trade between the US and Canada.

Edward Alden, a senior fellow at the Council on Foreign Relations, said the bridge was “the single biggest trade artery in North America”.

“More trade goes across that bridge than any other crossing, it’s the most important route,” Alden added. The “just in time” manufacturing process of auto companies meant that they were particularly affected by any delay in receiving parts, he added.

“Everything for them is set up assuming it will be easy to get back and forth across that bridge,” he said.

The crossing was not technically closed to US-bound traffic on Thursday, according to Windsor police, but demonstrators were “making it difficult to access the bridge”. Police warned of “significant” delays. 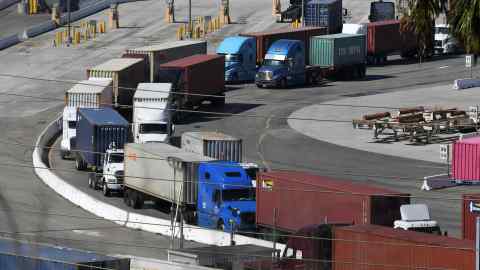 The US Department of Homeland Security said it was tracking reports of a potential convoy that may be planning to travel to several American cities.

The Ambassador Bridge traffic jam has piled pressure on Canada’s prime minister Justin Trudeau, who called the protests “unacceptable” and warned of the impact on manufacturers. “We must do everything to bring them to an end,” he said.

However, Trudeau has stood firm in his support of Covid restrictions, including the vaccination mandate for cross-border truckers that sparked the Freedom Convoy.

Matt Moroun, chair of the Detroit International Bridge Company that controls the Ambassador Bridge, called on the Canadian government to end the protest by repealing the vaccine mandate or removing the vehicles blocking access to the crossing.

“We are all just beginning to feel the devastating impact,” Moroun said. “This cannot continue any longer.”

The Canadian Trucking Alliance has said that 90 per cent of drivers have been vaccinated against Covid. This week, the group urged government officials to “work together in bringing an immediate end to the current blockades”.

Some regions in Canada have begun lifting Covid rules after a drop in reported infections, which had been driven up by the spread of the Omicron variant.