Policymakers should raise interest rates gradually rather than taking an “aggressive” activist approach, the Bank of England’s chief economist argued on Wednesday, adding that there would be no avoiding a painful income squeeze in the year ahead.

Huw Pill stood by the tough message delivered last week by the BoE’s governor Andrew Bailey, who earned sharp rebukes from the government, business groups and unions when he warned that wages would need to fall in real terms this year in order to keep inflation under control.

Wage growth approaching 5 per cent this year, as shown in the BoE’s latest forecasts, would be “stronger than that consistent with the inflation target over the medium term”, Pill told an online conference. If it eased from 2023, inflation could subside without the UK falling into recession.

But he said the path of monetary policy would depend on how “pragmatic and realistic” companies and households were about higher imported energy and goods prices, adding: “The longer that firms try to maintain real profit margins and employees try to maintain real wages, the more likely it is that domestically generated inflation will achieve its own self-sustaining momentum.”

Pill hinted that markets were overestimating the scale of monetary tightening the BoE was likely to deliver over the next year, however.

Keeping interest rates at 0.5 per cent indefinitely would leave inflation above target in the medium term on the latest forecasts, but raising them as sharply as market pricing implied — to 1.2 per cent by the end of 2022 — would take inflation below target.

“I leave it to you to draw any implications for where the MPC sees the path of bank rate headed,” he said. 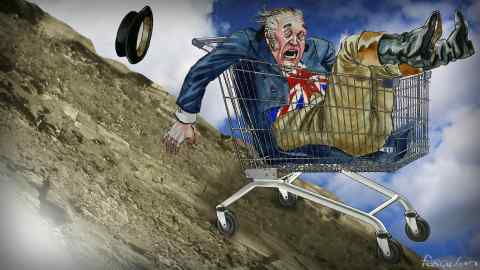 He underlined the uncertainty around these forecasts, however. If energy prices fell in line with market expectations, the BoE might be able to keep interest rates lower — but if companies and workers held out for higher prices and wages, it would need to clamp down harder.

Pill voted with a narrow majority of the BoE’s Monetary Policy Committee to raise interest rates from 0.25 per cent to 0.5 per cent last week. Four of its nine members wanted to signal their resolve to choke off inflation with a bigger half-point increase.

He said his preference was for a more “measured” and “steady-handed” approach, rather than a more activist one, partly because he was worried that unusually large policy steps could “validate a market narrative” that central bank policy swung between two extremes — “either foot-to-the-floor accelerator or foot-to-the-floor with the brake”.

Those perceptions had been fuelled by central banks’ response to the global financial crisis and the pandemic, he said, adding that more nuance would be needed as the economy normalised and decisions became more finely balanced.