Borrowing costs for southern eurozone governments jumped close to pre-pandemic highs on Monday as investors adjusted to signs that the European Central Bank could raise interest rates as soon as this year in response to the global wave of inflation.

The ECB has trodden a careful line on the prospect of rate rises for several months, promising to keep financing conditions favourable until the eurozone economy has rebounded from the pandemic and it is convinced inflation will settle at its 2 per cent target over the medium term.

But president Christine Lagarde signalled a “hawkish” shift on Thursday by refusing to rule out a potential rate rise this year — as she had done only weeks earlier — and noting “unanimous concern” on the ECB’s governing council about record eurozone inflation of 5.1 per cent in January.

Over the weekend, Klaas Knot, the Dutch central bank head, became the first member of the ECB council to say publicly that it should raise interest rates this year, warning that eurozone inflation would stay at 4 per cent for most of this year. He called for the ECB to end net bond purchases “as soon as possible” in preparation for raising rates in the fourth quarter.

In response, a drop in eurozone bond prices sent the yield on Italian 10-year bonds up 0.1 percentage points to 1.84 per cent — back to levels reached in April 2020 shortly after the coronavirus pandemic hit.

The spread between Italian 10-year borrowing costs and those of Germany — a key measure of stress in eurozone bond markets — rose to 1.63 percentage points, its highest level since July 2020.

The drop was even greater in Greek 10-year bonds, as their yield rose 0.3 percentage points to 2.55 per cent — the highest level since June 2019. Selling pressure was widespread and Spanish 10-year yields rose above 1.1 per cent for the first time for almost three years.

Analysts said the bond market was adjusting to the increased likelihood that the ECB could bring net asset purchases to an end in the next few months, opening the door to its first interest rate rise for more than a decade.

“We are ending a period of negative rates — even Greek bond yields turned negative last year — and we are seeing a repositioning of the market,” said Carsten Brzeski, head of macro research at ING.

However, Brzeski said investors seemed to have “moved completely to the other extreme” by pricing in an ECB rate rise by June, adding that the earliest he could imagine such a move was September. 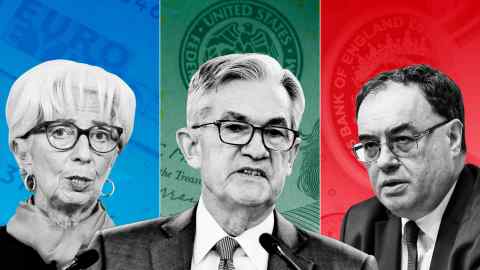 But selling in Italian, Greek and Spanish debt eased later in the day after Lagarde downplayed the chances of a sudden shift in ECB policy by saying there was “no need to rush to any premature conclusion at this point in time — the outlook is way too uncertain”.

The yield on the 10-year Italian government bond pared its gains to sit at about 1.78 per cent. The equivalent Greek yield stood at 2.45 per cent in the late European afternoon, while the Spanish 10-year yield moved back below 1.1 per cent.

The ECB has amassed huge influence over eurozone bond markets, particularly in the past two years when it has bought more than 100 per cent of debt, net of refinanced bonds, issued by governments in the single currency bloc. The central bank has almost doubled the total amount of bonds it owns to €4.7tn.

In December, it outlined plans to stop net purchases under a €1.85tn emergency programme at the end of March, followed by a temporary doubling of an earlier bond-buying programme before reducing it back to €20bn a month from October.

However, some veteran ECB watchers worry it risks repeating the mistake of raising rates too soon, as it did in 2011, just as the eurozone sovereign debt crisis was starting.

“We’ll pay the price for the premature tightening as we move through 2023-24 in the form of lower growth, higher unemployment and inflation well below 2 per cent,” said Erik Nielsen, chief economics adviser at UniCredit.

Italian stocks also took the strain on Monday. While other parts of Europe’s stock markets pushed a little higher, Italy’s FTSE MIB dropped as much as 1.7 per cent.