The start-up behind Bored Ape Yacht Club, the non-fungible token collection that counts celebrities such as Gwyneth Paltrow and Snoop Dogg as owners, is discussing a financing with Andreessen Horowitz that would value it at between $4bn and $5bn.

According to people with knowledge of the discussions, NFTs pioneer Yuga Labs is seeking to sell a multimillion-dollar stake in a new funding round.

These people said that among those in talks over an investment is Andreessen Horowitz, one of Silicon Valley’s top venture capital firms, which was previously an early investor in Facebook, Twitter, Airbnb and Stripe.

The terms could still change, and any discussions might not lead to a deal, said people close to ongoing negotiations. Any deal would mark the first institutional investment into Yuga, a secretive outfit led by pseudonymous founders — Gordon Goner, Emperor Tomato Ketchup, No Sass and Gargamel.

It would place the US-based company at the forefront of the frothy but lucrative market for crypto art, less than one year after it debuted the BAYC collection, with some items selling for millions of dollars each.

Yuga did not respond to multiple requests for comment. Andreessen declined to comment. A video series hosted by The Nifty, a website for NFT data and analysis, first reported that Yuga was seeking investment. 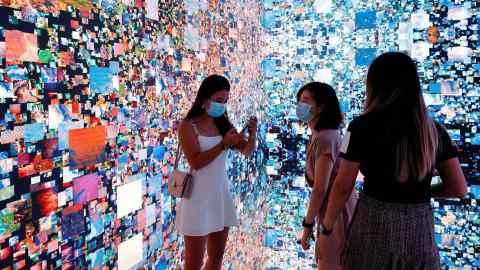 The negotiations signal how institutional investors are seeking to dive into the hype-fuelled world of NFTs — collectible tokens that are fixed on the blockchain and so cannot be replicated.

Sales of the digital assets surged last year to become a global market worth $40bn. Facebook’s parent Meta is among the big tech companies exploring the market by allowing users to make and sell NFTs.

Analysts have warned of scams and dubious trading in the NFT market, but Silicon Valley investors see an opportunity for new consumer brands or tech platforms to be built from the craze for high-priced profile pictures. Andreessen is a big shareholder in cryptocurrency exchange Coinbase as well as NFT exchange OpenSea, and plans to raise $4.5bn for a new set of crypto funds.

The price of Bored Apes has soared to upwards of $250,000 since Yuga created — or “minted” — 10,000 of the collectibles for about $300 apiece in April last year. They used to signal stature on social networks such as Twitter. Yuga collects a cut from resales of Bored Apes.

According to some BAYC owners, Bored Ape characters are expected to feature in the Super Bowl halftime show next month, where collectors Snoop Dogg and Eminem are due to perform. It is one of the most-watched television events in the US every year and would be an opportunity to reach a more mainstream audience.

The rise of BAYC has attracted controversy. Some NFT artists have accused the collection of spreading racist imagery. Yuga said this month that the collection’s inspiration came from cryptocurrency “apes” — a reference to high-risk traders.

Investors in the surging NFT industry said venture capital groups are interested in cashing in on Yuga’s elite community of celebrities and wealthy enthusiasts, potentially through the creation of new collections and media projects.

People familiar with the talks said Yuga could even issue crypto tokens to investors and existing Bored Ape holders, which could then prove valuable on the resale market.

Yuga was incorporated in February 2021 and had just 11 full-time employees at the start of this year. It recently said on Twitter: “Our ambition is for this to be a community-owned brand, with tentacles in world-class gaming, events, and streetwear.”

Video: Sports NFTs: collectors, players and leagues cash in on the action