Several private equity firms are considering bids of up to $25bn for Sandoz, the generic drugs business belonging to pharmaceutical company Novartis, according to multiple people with knowledge of the situation.

Blackstone and Carlyle were looking at a potential joint bid, said people familiar with their plans, while Sweden’s EQT was considering a separate bid alongside the Struengmann family, which sold its Hexal generic drug unit to Novartis for $7bn in 2005, said another person.

Novartis is in the midst of considering its options for divesting Sandoz, one of the largest generic drug manufacturers, either by spinning it off or through a full sale. The private equity discussions were at a very early stage, a number of the people said. They added that no formal bids had been made.

Any sale process would be expected to start closer to the summer, said a person with knowledge of the situation.

A person familiar with Sandoz stressed a spin-off, such as that of Novartis’ eyecare division Alcon in 2019, continued to be an option

“PE is not the only thing the company is thinking about,” the person said.

They added there was a carve-out process under way to separate the financials of Sandoz.

“When you have that, it is basically getting ready and it’s just a question of who the future owners [are],” they said.

“Everybody in PE directly or indirectly is asking,” they said. “Officially the [Novartis] response will be retaining [Sandoz] is an option . . . I think it’s very unlikely.”

Bloomberg first reported the preliminary interest in Sandoz and that a consortium led by Advent International, Hellman & Friedman and KKR was also considering a bid.

Private equity has been racing for investment targets in the past few years: the industry struck a record $1.1tn of deals in 2021, according to PitchBook data, with the pharmaceutical and healthcare sectors among the most active. 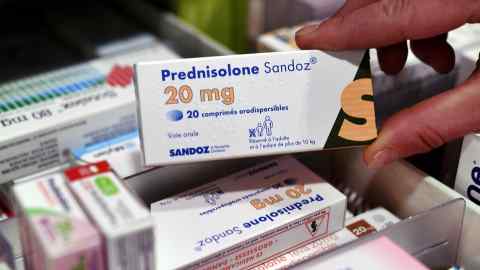 The investment pile-in comes as corporate giants such as Unilever, General Electric, IBM, Siemens and Johnson & Johnson break themselves apart to streamline their operations. With record amounts of new cash to invest and financing markets buoyant, private equity buyers have been increasingly able to raise the debt and equity to buy large divisions from these conglomerates.

Novartis said late last year it had begun a strategic review of Sandoz, which might include a sale. It has also been refocusing on higher-grossing, smaller-volume drugs, in line with industry trends.

A Sandoz insider said discussions about the future of the unit, which generates about a fifth of group sales, had been continuing for years, with possible scenarios including a listed spin-off and a mixed acquisition by private equity and another large pharma group.

The business could be worth between $20bn and $30bn, the person said.

Novartis chief executive Vas Narasimhan said last year in an interview with the Financial Times that there had been preliminary interest from a number of investors, including private equity firms and other pharma companies.

“We’re collecting all of these [preliminary proposals] and we’re assessing them,” he said, though he noted there was no particular rush.

Over 7mn at risk of ‘financial exclusion’