Over 7mn at risk of ‘financial exclusion’


Over 7mn people in the UK risk being excluded from accessing affordable financial services because of flaws in credit scoring and are forced to rely instead on expensive options such as subprime lenders.

Sources of data beyond bank statements and utility bills could offer a more complete view of the finances of those facing “financial exclusion”, according to a report by LexisNexis Risk Solutions, which designs software to help banks spot suspicious transactions.

“It is increasingly clear that credit scoring methods relying on generic credit history trends are becoming ineffective in the face of an increasingly dynamic UK population in which people’s lives are nuanced and complex,” said Steve Elliott, managing director at LexisNexis.

LexisNexis estimates that one in seven adults in the UK is at risk of being financially excluded, including 5.8mn who have no record of an open or closed current account and 1.7mn without any financial or credit service activity in the past 24 months.

While the national average of 13.2 per cent of the population applies fairly consistent across most of the UK, it is as high as 22.8 per cent in Northern Ireland.

People aged from 55 to 75 years old are most likely to experience financial exclusion, particularly due to a lack of a current bank account and a greater reliance on cash. This week, the Post Office announced an extension of a framework with major banks to allow customers to use branches for cash until the end of 2025.

By contrast, millennials with limited access to safer, mainstream funding are racking up subprime credit debts even as the industry continues to face pressure from regulators. Some 37 per cent of short-term loan applications were made by 26-to-35 year olds.

But the costs go beyond borrowing, said Elliott. “Right across consumer activity you can find people driven to higher-cost solutions as a consequence of being unable to access cheaper ones,” he said. “You might not get a smart meter in your house, for example, so you might need to get a more expensive ‘pay as you go’ option.”

Energy prices have become a particularly acute problem this year, with the UK’s energy regulator Ofgem announcing a rise in its cap on February 7 after a 12 per cent rise in October. 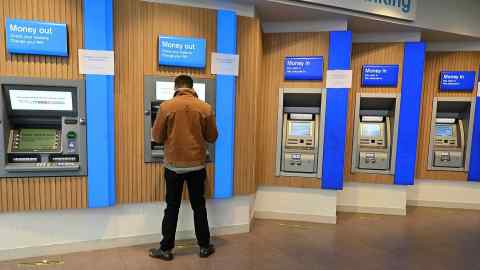 But gas and electricity are not the only rising costs for consumers. UK prices rose at their highest rate in 30 years in December, with consumer price inflation hitting 5.4 per cent, significantly ahead of increases in earnings.

LexisNexis said it was able to offer a risk score for more than 5mn of the financially excluded by going beyond traditional metrics such as bank statements.

Alternative data sources could include phone contracts, rental payments and payment histories on buy-now-pay-later apps (although these apps face separate criticism over the level of credit checks which they impose).

Efforts to build out alternatives to traditional risk scoring are not limited to those facing financial exclusion. “Traditional credit data is based on a narrow view of someone’s financial situation — using information like previous borrowing behaviour and address history — which can be up to 60 days out of date,” said Freddy Kelly, chief executive and founder of Credit Kudos, which provides technology for rental apps.

Nevertheless, privacy concerns can limit data collection. Such concerns have grown during the pandemic amid worries of how personal and public information aggregated by private companies could be used, for example, for targeted advertising, or end up penalising those it is meant to help.