US stock and bond prices swung lower on Wednesday afternoon after the Federal Reserve signalled that it would begin raising interest rates at its next monetary policy meeting in March.

The benchmark S&P 500 index closed down 0.1 per cent for the day, reversing earlier gains after Jay Powell, Fed chair, declined to rule out raising rates at every policy meeting for the rest of the year. The index’s reversal was briefly 3.4 per cent between its high point and its nadir in late afternoon trading, the biggest downward turn since September 2020.

“In my view, I do not think Fed chair Powell could have been more hawkish during his press conference than if he raised rates today,” said Tom di Galoma, managing director of rates trading at Seaport Global. “I believe all the signs are there for a hike coming at the March meeting followed by at least three more in 2022.”

Markets have shifted violently in recent weeks as investors braced for the effects of an impending rate rising cycle by the US central bank as it aims to tame soaring inflation.

Stocks briefly jumped after the central bank published its policy decision without announcing any big surprises, but investors reversed course as Powell spoke to journalists later in the afternoon.

He stressed that the central bank would move “as appropriate” to combat rising prices, cautioning that the inflation outlook had worsened since the Fed’s last policy meeting in December and noting that supply chain issues may not be resolved by the end of 2022.

The technology-focused Nasdaq Composite index closed unchanged, helped by a 2.2 per cent gain for Microsoft, the index’s second-largest constituent. The tech group published an upbeat financial forecast after markets closed on Tuesday evening, providing some reassurance to investors after a weak start to earnings season by other large technology groups such as Netflix.

Speculative technology stocks have been particularly badly hit by the recent speculation over rising interest rates. Higher rates make it more expensive for companies to borrow and invest, and reduce the present value of companies’ expected future earnings in investors’ valuation models. 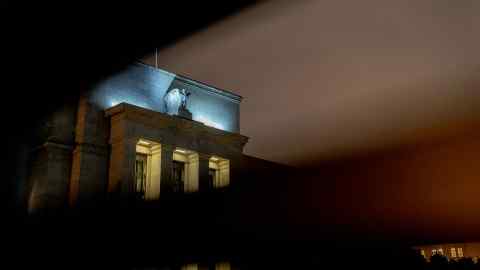 The annual pace of US consumer price inflation reached an almost 40-year high of 7 per cent last month, with price rises broadening out from areas hit by pandemic-related supply chain bottlenecks into most categories, including food and rent. Unemployment has fallen to almost pre-pandemic levels. Labour shortages and record job openings have also spurred wage growth.