Virtual Zilch “cards”, which can be downloaded to users’ phones and tapped at checkouts, are now accepted at thousands of retailers across the UK, including supermarkets.

They allow users to pay just a quarter of an item’s purchase price and spread the remaining payments over six weeks.

Buy now pay later (BNPL) schemes, made popular by companies such as Klarna, Clearpay and Laybuy, are seen as an attractive alternative to credit cards as there is no interest on the borrowing, although some charge late fees on missed repayments.

Until now they have been commonly used to fund purchases of clothes and big-ticket items, but the market is increasingly moving into grocery spending too.

Critics are concerned that BNPL is not only being used to fund essential groceries, but also treats that may unnecessarily increase personal debt.

A blog on Zilch’s website featured “11 must-have shop now pay later” buys from Sainsbury’s, including items such as a £5 PizzaExpress Margherita and Galaxy triple chocolate cake for £3.

“At Zilch, you can have your cake and eat it too,” said the blog. “That’s why we offer you shop now, pay later not just at Sainsbury’s, allowing you to push the boundaries of your everyday existence, and get even closer to living your best life.”

About the PizzaExpress Margherita, which was recently on offer for £2.50, it said: “Whether you’re entertaining guests or having a quiet night in with some Netflix, this delicious pizza perfectly simulates eating at PizzaExpress itself . . . With Zilch’s buy now, pay later for food, we’ll have your finances looking as crisp as your crust.”

But some consumer finance lobbyists have criticised Zilch’s approach. Scott Mowbray, co-founder of the money-saving app Snoop, said: “To my mind, highlighting a £2.50 pizza in a list of ‘top 11 must-have BNPL items’ demonstrates one of my biggest issues with this form of payment — the way it is marketed and presented.”

He added: “They are preying on people’s fear of missing out, which could lead to a cycle of debt — and that’s all the more worrying at a time when living costs are set to soar. We’re not talking about people using the service to buy essential groceries to get through to payday, but just treating themselves.”

Consumer campaign group Resolver said: “On the face of it, Zilch is making it even easier to spend — and by doing it on a card it’s even harder for people to know what their debts are, how much they are spending and what the ultimate price will be.”

London-based Zilch — which announced a valuation of $2bn in November after closing a funding round of roughly $110m — is one of the few BNPL operators regulated by the Financial Conduct Authority. 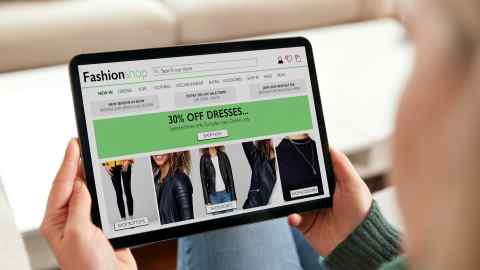 The UK government is considering how to regulate the industry, following concerns from consumer lobby groups that BNPL services fuel unsustainable debts.

In its terms and conditions, Zilch reserves the right to refer late payments to its debt collectors and says customers’ credit scores may be affected. But responding to the FT, it said it carried out precise affordability checks, which mean it has never had to use debt collectors. There were also no late fees, it said.

Commenting on the blog on Sainsbury’s, the company added: “As most customers shop for products rather than ‘brands’ we do from time to time talk about specific products in our blogs or social media, but it is rarely the case that we see customers make a single item purchase paid in instalments, or BNPL on Zilch. In fact, the most typical use case of our BNPL product is to do a large shop for an average order value of £55-£65 and spread the costs over time.”

Zilch says that before buying anything, users must visit the Zilch app, where they can check how much they can borrow and their repayment plan.

The company maintains that its BNPL scheme helps people to get through to payday and avoid the traps of interest and late payment fees often charged by other lenders.

Money Clinic podcast: How can I improve my credit score?

Busting the myths about credit scores

RPA EDGE: Robert Capone on The Value Of Retirement Plan…