Chinese social media users have attacked Elon Musk after satellites of SpaceX, his private rocket company, forced the country’s space station to manoeuvre out of the way to avoid collisions twice this year.

The country’s mission to the UN complained this month that the Chinese space station had to take “preventive collision avoidance control” measures in October and July to “ensure the safety and lives of in-orbit astronauts”.

China said the two satellites from SpaceX’s Starlink internet network were moving dangerously and alleged that one had an unpredictable “manoeuvre strategy”. Beijing did not say how close the spacecraft had come to a collision.

The latest criticism came months after a public relations crisis for Tesla in China, a crucial market Musk’s electric vehicle company, with sales in the country making up a fifth of the carmaker’s global total last year.

Car owners alleged braking issues with Tesla models, spurring one customer to climb on top of a vehicle wearing a T-shirt with the words “brake malfunction” at the Shanghai Auto Show in April in front of attendees and media.

Some Chinese military compounds in Beijing banned Tesla owners from parking their vehicles inside the gated areas where personnel live, alleging that the cars’ cameras posed a security risk. Musk denied the devices could be used for spying.

Musk’s Starlink has almost 1,900 satellites in orbit, with plans for as many as 12,000 to beam broadband down to earth.

“Tesla and SpaceX have the same problem, they can’t brake,” quipped one user on social media platform Weibo. 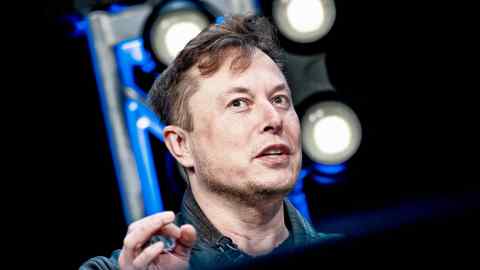 Another Chinese user called Starlink “the world’s biggest pile of space junk”. European industry experts have warned that the expanding Starlink project exacerbates the growing problem of space debris, with more than 100,000 commercial spacecraft projected to be in orbit by 2029.

Josef Aschbacher, director-general of the European Space Agency, told the Financial Times this month that the continent’s inaction has meant the entrepreneur was “making the rules” himself for the space economy.

Hu Xijin, a commentator for the Global Times, a nationalist Chinese tabloid, wrote on Twitter: “Could Mr Musk please explain why satellites launched by his Starlink program had two close encounters with China’s space station. They were not there to sell Tesla to Chinese taikonauts, were they?”

Other Chinese citizens called for Musk to be kicked out of China.

Starlink did not immediately respond to a request for comment.

Video: Space-based solar power ‘could be deployed in 10 years’

The three questions that dominate investment

21% Of Americans Are Vaccine -Hesitant: But Don’t Be Harsh