The growth of mortgage-free home ownership has peaked in England and will fall back over the next five years, research has found, suggesting cash buyers will be thinner on the ground in the housing market in the coming decade.

The proportion of homeowners without mortgages has risen from 37 per cent in 1991 to 54 per cent in 2020, according to research by estate agent Hamptons International.

That share is set to fall to 51 per cent over the next five years, Hamptons predicted, as those in younger age brackets increasingly buy with mortgage finance — and at longer terms — than in previous years.

In addition, today’s owners are unlikely to benefit from house price growth on the scale seen in England over the past 30 years, which for the older generation of owners eroded the size of their mortgage relative to the value of their home.

Over the past five years, the ratio of homeowners aged over 65 to those under 35 has narrowed significantly, Hamptons said. These younger buyers are as likely to have a mortgage as their older counterparts are to be without one, with 93 per cent in the younger groups relying on home loans to buy. Among over-65s, 94 per cent are mortgage-free, according to the official English Housing Survey published this month.

Aneisha Beveridge, Hamptons research director, said those in their 40s and 50s were also more likely to be mortgage borrowers than in the past. “The absolute number of older homeowners with their mortgage paid up is likely to start falling, accelerating the drop in the share of homes owned outright.”

Mortgage-free owners looking to buy a new or second home have an advantage in the housing market, since they are typically able to conclude a purchase more quickly than those requiring the say-so of a lender.

The pandemic triggered a surge in demand for home moves among those seeking more comfortable or suitable places to live under social restrictions, but also led to a shortage of housing stock available to buy. This further strengthened the position of cash buyers in the contest for desirable properties.

Beveridge said: “A lot of transactions over the past 18 months have been wrapped up in some quite complicated chains. That’s where cash buyers can really step in and make a difference, because they can break up those chains or shrink them.” 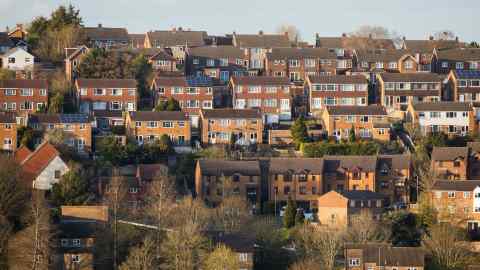 When buying today, many over-65s can capitalise on housing wealth built up over decades of ownership during periods of “drastic house price growth”, she said. As younger homeowners reach the same age in years to come, they are less likely to benefit from a similar level of growth — in spite of short-term surges such as that experienced over the pandemic.

They are also less likely to be closing their account with their lender. Mortgages with term lengths of 35 and 40 years have become far more common among buyers looking to fulfil lenders’ affordability checks. But it means about one in five people expect to be paying their mortgage in retirement, according to research from Hargreaves Lansdown.