KKR has acquired a £300m holding in the UK’s largest gym operator PureGym, as private equity continues to sweep up stakes in British hospitality and leisure businesses during the pandemic.

The deal, which makes the US buyout firm a significant minority investor and values the company in excess of £1.5bn, according to a person with knowledge of the deal, will fund PureGym’s expansion plans across Europe.

In a statement, PureGym said it “believes the conditions are now right for significant further development of the business”. The low-cost fitness group operates 511 gyms and now has access to £500m of capital to continue its growth in the UK, Switzerland and Denmark.

PureGym, which has franchise sites in Saudi Arabia and is launching trial sites in the US, would “sustain continued international expansion over the coming years” and aimed to double the number of venues in the UK and Switzerland, the company said on Tuesday.

KKR told the Financial Times in July that it would set up a new team of UK-based dealmakers to focus on British companies, as private equity benefits from depressed valuations, partly due to Brexit and the pandemic.

Blaine MacDougald, partner and co-head of KKR’s Strategic Investments Group, said PureGym had “emerged as an outstanding performer in its sector” and was “well positioned to take advantage of the global opportunity in health and wellbeing”.

PureGym has been funded by private equity since CCMP Capital bought a stake in the company in 2013. Leonard Green & Partners then purchased a majority stake in 2017, valuing the company at £600m. LGP will retain its majority ownership position, the statement said.

The Leeds-based gym operator has grown substantially since then and acquired Danish operator Fitness World for £350m in 2020. The company appointed advisers to work on an initial public offering in August but it has now raised the capital it needs.

The decision to raise funding privately differs from the approaches of UK rival The Gym Group and Europe’s largest chain Basic-Fit, which are listed in London and Amsterdam respectively. 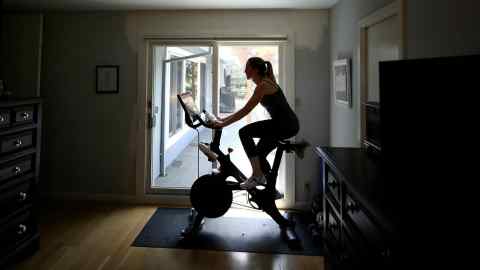 Humphrey Cobbold, chief executive of PureGym, said: “With health and wellbeing rising to the top of the global agenda, we now have the capital, the capabilities, the technology and the management team to become a global fitness and activity operator.”

In the quarter to September 30, PureGym reported revenues of £111m, ahead of the same period in 2019 thanks to its expanded operations, and had almost £800m in secured net debt.

Low-cost fitness has boomed during the pandemic recovery, with memberships almost returning to pre-pandemic levels at PureGym, The Gym Group and other low-cost operators. The sector remains vulnerable to changing government guidance on coronavirus, however.

The reintroduction of working-from-home measures in the UK because of the spread of the Omicron variant has led to a fall in attendance of city-centre gyms in the past week.

In response to the success of at-home fitness companies during lockdowns, PureGym plans to launch a Peloton-style connected bike next year. Cobbold told the FT last month that “an emerging Champions League of gyms”, including PureGym, had an opportunity to innovate and expand.