High street banks must club together for the common good


It is sad but true that the latest round of branch closures by TSB came as little surprise, even though it is the bank’s third round of cuts in less than three years.

It is most welcome that the industry’s Access to Cash Action Group, chaired by Natalie Ceeney, is expected to formulate proposals for meeting the needs of those customers, many of them vulnerable people, who depend on local branches for cash and other services.

The proposals, due to be released on December 15, are expected to back the commonsense solution of shared bank hubs in locations where individual bank branches are no longer considered viable.

As a longstanding campaigner for bank access, I can say that this intervention comes not a moment too soon. The larger towns and urban centres being robbed of their branches are home to many people who rely on cash and face-to-face contact, including small business owners, market stall traders and local charities, as well as the financially vulnerable.

Moreover, for the likes of Barclays, Lloyds, NatWest and the smaller TSB, multi-bank hubs offer a realistic way of competing in the mass retail market against digital newcomers such as Monzo, Starling and Revolut.

Following the Treasury’s consultation on access to cash, which concluded in September, there will be legislation next year to protect access to local banking. But I fear it may not be soon enough or strong enough to stem the tide of branch and ATM closures nor to ensure sufficient hubs to meet the escalating need.

The hub model in which different providers of banking services share premises has long been operating in the US and working examples exist elsewhere in the world. 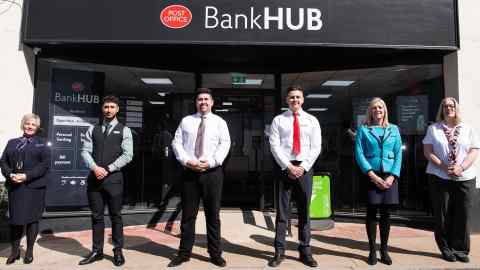 In the UK, with industry support and government approval, two pilot schemes were successfully run for six months to October, using post office systems but located in non-post-office premises. Both pilots are now extended for 18 months — one in Rochford, Essex, and the other in Cambuslang, Lanarkshire.

Much bolder moves are overdue as 150 larger towns are already down to 1 or zero bank branches.

In these larger, previously multi-banked, communities a post office alone is not always suitable. A bank hub can be sited in any secure and accessible space, where personal and small business customers of the major banks can come for deposits, change and withdrawals.

These services can be augmented, as in the current pilot, by weekly rotas of daily surgeries by laptop-enabled bank representatives to satisfy those less frequent financial needs which many people like to handle face-to-face.

These include opening accounts, the processes linked to bereavements and powers of attorney, replacement cards, changes to direct debits and mandates plus arrangements for large payments and cash withdrawals.

It’s not just poorer communities that suffer but affluent places with plenty of wealthier customers. Take Harpenden in Hertfordshire, a thriving town of 32,000, which has lost, or is in the process of losing, four of its six banks

The current two pilots depend on Post Office systems, but there are alternatives, such as the Link technology which enables usage of ATMs by different banks’ customers.

For high street lenders this is not about doing the customers a favour — but developing viable strategies to fight off digital-only rivals.

Having abandoned many of the structures and services that distinguished one bank from another, and withdrawn altogether from most small rural communities, the high street banks are left with “identikit” operations in larger town centres which remain expensive to run.

The current strategy of reduced opening times and restricted counter access in a feeble, unpopular attempt to reduce costs simply drives more of us to go digital, willing or not.

It’s not just poorer communities that suffer but affluent places with plenty of wealthier customers. Take Harpenden in Hertfordshire, a thriving town of 32,000, which has lost, or is in the process of losing, four of its six banks. The remaining two appear to be at risk, having already reduced services and opening times.

The bigger high street bank networks, currently running with 500-750 branches each after savage cuts, are well on the way to perhaps 400 full-service branches apiece, confined to busy city centres.

To sustain their vital differentiating factor — the availability of face-to-face customer contact — and to do so cost effectively, the big networks need to move quickly, rolling out bank hubs.

Certainly, traditional banks, which can still realise net annual savings of up to £250,000 per branch closed after contributing to hub costs, do need to shut more branches.

But to all close their doors in locations without offering adequate alternative provision is unacceptable and does not make business sense. High street banks need to act soon, before it is too late.