Andy Bell is intent on “stirring up trouble” for the large investment platforms that dominate the UK market, as he launched plans to capitalise on a generational shift among retail investors.

The entrepreneur, who started the AJ Bell funds supermarket in 1995, said platforms like his company’s retail service and larger rival Hargreaves Lansdown, which have dominated the market and earned hefty profit margins, now face “disruption” from low-cost mobile app challengers that appeal to younger customers.

“We don’t want to wake up in 10 years’ time and find that these customers have gone somewhere else and we’ve missed the boat,” said Bell in an interview with the FT.

That logic led the company this week to set out plans to launch a stripped-down, zero commission investing app called Dodl early next year, which Bell hopes will hit the spot with “a younger audience” and people who have never invested before.

Despite the move to cut fees, Bell warned that an all-out race to the bottom on pricing in the retail brokerage market would hurt investors in the long run if it led companies to become unsustainable.

“Lots of industries have short-term price wars. It doesn’t feel like that is what’s happening here,” he said.

US retail brokers have slashed prices in recent years as low-cost challengers such as Robinhood drove a race to offer zero-commission trading. Executives insist a “no fee” model is far from taking hold in the UK. Unlike in the US, brokers in the UK cannot take payment from market makers in exchange for carrying out trades.

Dodl clients will pay an annual charge of 0.15 per cent on their portfolios, but no fees for trading. The price compares with 0.25 per cent a year on AJ Bell’s standard share dealing account, plus £9.95 per stock trade.

The rise of slick trading platforms, particularly in the US, has prompted worries that these fee-free apps can encourage excessive trading. But Bell insisted the new app will not be for “memestock traders”, in part because it will only execute trades once a day.

Bell was speaking on Thursday as the company announced financial results for the year to September. It posted a 13 per cent rise in pre-tax profits due to record customer and asset growth, boosted by “forced savings” and extra free time available to its clients to invest during Covid-19 lockdowns. However, shares in the FTSE 250 Group ended the day 8 per cent down as investors balked at the growing cost of investing in tech.

Addressing the fear that offering a cut-price option would undermine AJ Bell’s main direct to consumer platform Youinvest, Bell said: “We’d rather disrupt our own market than be disrupted.”

The average age of new Youinvest customers is 39, Bell said, slightly younger than existing clients at 44. 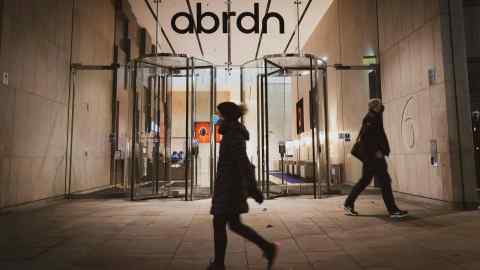 “What we look forward to with Abrdn — beyond the benefit of being part of a FTSE 100 financially deep company — is that they have advice, research and wealth services that we would benefit from having more of,” said Richard Wilson, Interactive Investor’s chief executive.

Interactive Investor made its own play to sign up members of the younger generation last month when it announced that, for a monthly flat fee of £5, clients will be able to give out up to five “friends and family” accounts, allowing new recruits to buy stocks and funds as well as open tax-protected investing vehicles.

Start-up rivals have also gained ground. Freetrade, which recently surpassed £1bn in assets, is seeking to double its valuation to £650m in a fresh round that will give it more cash to invest in growth. Like Dodl, the app charges no upfront fees. Instead, it makes revenue from foreign exchange fees and from a premium monthly subscription service.

While the surge in customer sign-ups and trading activity has slowed since lockdowns ended in the UK, Bell was sanguine about the sector’s growth: “If next year is quieter than this year, but the long-term growth is in the right direction, I’m not going to lose any sleep over it.”

Prev Next
89 Comments
Leave A Reply