Brokers face the threat of penalties for breaking individual savings account (Isa) rules as part of a proposed overhaul to protect customers after the collapse of minibond provider London Capital & Finance.

HM Revenue & Customs has issued a call for evidence on plans to fine brokers and fund supermarkets that fail to comply with Isa rules due to concerns that the current system “primarily penalises investors” for brokers’ bad behaviour.

The review follows the collapse of minibond company LCF, which fell into administration in 2019 after investing £236m of customers’ money into high-risk and unregulated products.

Investors paid more than £100m into LCF accounts sold as Innovative Finance Isas — a type of Isa introduced in 2016 — promising interest rates of up to 8.95 per cent. They later discovered that although LCF was an HMRC-approved Isa manager, the minibonds it sold were unregulated and did not qualify for Isa status.

An independent review into the regulation of LCF found there was a “lacuna” in the way Isas were regulated and the Treasury last year promised “urgently” to review the system of checks and penalties on managers of Innovative Finance Isas.

Proposals under consideration by HMRC — which would cover all Isas — include a fine of £10 per compliance breach per account, multiplied by the number of relevant tax years. Alternatively, a 1 per cent penalty could be introduced on the value of investments in affected accounts for each tax year in which the breach took place.

For larger breaches, those fines could increase to a flat fee of £100, or a percentage-based fee of 5 per cent. HMRC has also asked for views on deterrents that do not end in a penalty, and whether to reduce fines for mitigating factors.

HMRC is seeking views until February. It wants to create a “modernised compliance penalty regime” designed to “prevent careless and reckless Isa management”. 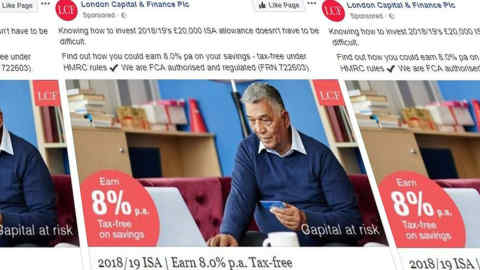 The tax authority is concerned that the existing regime punishes investors for an Isa manager’s mistake. Currently a breach of Isa rules can result in all affected Isas being voided and customers losing the benefits of the tax-free wrapper. In most circumstances, HMRC then tries to recover any income tax or capital gains due directly from the investor.

HMRC said: “Voiding the Isa is often disproportionate to the severity of the breach and primarily penalises investors rather than Isa managers.”

The Revenue is concerned that “the existing penalty regime provides little motivation for managers to ensure their systems and processes are updated to prevent breaches of the Isa regulations”.

The current system also allows for HMRC to enter into a settlement agreement with an Isa manager — so called “simplified voiding” in cases where only a small inadvertent compliance breach has occurred. In this case the Isa wrapper is not removed and the Isa manager agrees to pay a sum to cover the lost tax. But this solution is not available where a manager has deliberately or egregiously broken the rules.

However, HMRC said: “At the moment some Isa managers repeatedly break the rules and pay the penalty because it is cheaper than fixing their systemic problems. This has led HMRC to question whether the current approach is robust enough to encourage positive compliance behaviours in the management of Isas.”

Interest rate hikes will not dim the allure of property