Earlier this year, Germany’s Bayerische Landesbank quietly decided it did not want to do business with defence companies any more.

“BayernLB has not announced it to the public yet,” a bank spokesman told me this week. “We are fading out business relationships with companies . . . [having] above 20 per cent turnover in defence.”

The decision has sent shivers through Europe’s defence industry. Bavaria is, after all, home to some of Germany’s biggest defence companies such as Airbus Defence and Space and Hensoldt. If Bavaria’s state-controlled bank believes defence is too controversial to deal with, why should private sector banks step in?

Now a bigger threat is coming, this time from Brussels where a discussion is under way about what constitutes socially sustainable finance.

Europe’s classification system for green investment — known as the environmental taxonomy — will soon be published. But officials are already working on a “social taxonomy” to define which activities contribute positively to society, those that do no significant harm, and those that are harmful.

In draft proposals presented this year, the defence industry was grouped with gambling and tobacco as harmful and, so, potentially not socially sustainable. The draft moots limiting the label “harmful” to activities banned by international treaties, such as chemical or biological weapons. But the language remains unclear.

Another proposal suggests barring companies from qualifying for an eco-kitemark to be used for retail financial products, if more than five per cent of turnover comes “from the production or trade of conventional weapons and/or military products used for combat”. This time there is no qualification about controversial activities.

Not surprisingly, Europe’s defence industry is raising the alarm. ASD, the European defence industry’s trade association, has written to the commission to warn that these proposals could undermine the bloc’s security by restricting defence companies’ ability to secure finance and so to invest.

“It is a problem if we are defined as not socially viable,” said ASD president Alessandro Profumo, who is also chief executive of Italy’s defence champion Leonardo. “Without security we cannot have a sustainable society.”

Already the proposals are having an impact. Jan Pie, ASD secretary-general, cites examples of banks cutting ties with defence companies in Germany, Finland, Belgium, the Netherlands and Sweden. One Belgian group has even had to pay employees from non-EU bank accounts, he says.

Germany’s defence industry trade body has found that more than a third of members face urgent issues with banks, such as refusal to provide standard services or export insurance.

The pain is being felt most acutely by smaller companies, crucial to the supply chain and innovation, says Profumo. But the proposal also risks deterring civil companies, which provide increasingly important technology to defence projects. 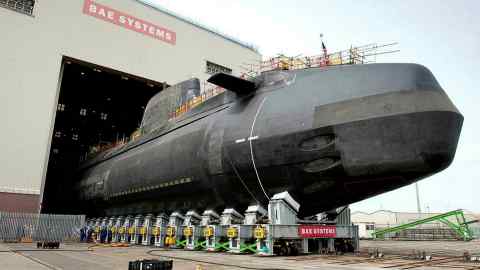 There are good reasons to be critical of the defence industry. Transparency International has found that just 12 per cent of the world’s top 134 defence companies show a high level of commitment to fighting corruption. But there are many international treaties defining legitimate trade in conventional weapons and Europe’s defence industry is still crucial to the bloc’s security.

European politicians including Commission president Ursula von der Leyen have recently stressed the need for a strong defence industry in the face of growing global threats.

There is an incoherence in defining defence companies as “socially harmful” if they are at the same time vital to the EU’s peace and stability. Defence is not the same as tobacco and gambling, where it is difficult to see any wider social good.

Some may not like defence, according to consultant Francis Tusa of Defence Analysis, “but then they have to do a better job of explaining how we would work without it”.

The commission should think carefully about the consequences of indiscriminately labelling the sector as unsustainable. Making it more difficult for law-abiding companies to raise finance will either force governments to shoulder more expense, or buy more from abroad — where Europe will have even less control over behaviour.

Of course weapons are harmful. But they are even more harmful if those who threaten you have them and you do not.

Lecturers at 58 UK universities strike over pensions and pay

Mortgage And Refinance Rates, May 24