There are myriad tax pain points that come from selling goods, content or services globally.  As the world has seen a surge in cross-border transactions, digital-first businesses face the challenge of understanding and managing global tax and compliance matters as they grow and scale internationally.

Fonoa, which helps companies like Lime, Uber, Teachable and Zoom stay tax compliant, has raised a $20.5 million in a Series A round as more goods and services are sold online — especially across international markets. Its customers primarily come from the ride-hailing, mobility, food delivery, SaaS and e-commerce industries, and also include subscription businesses.

CEO Tremac says Fonoa’s APIs “easily” integrate with a customer’s existing data so they don’t have to spend hours figuring out tax matters manually. The company has surpassed 300 million tax transactions per year, as demand for its automated offering has grown. As a B2B SaaS operator, the company has “very healthy margins” and has seen 7x revenue growth since December 2020, according to Tremac.

“In the digital world, businesses and customers transact on a global scale. Country borders are no longer a limiting factor, and technology drives global trade at an ever-increasing speed,” he said. “Combined with the increased scrutiny by regulators, dealing with tax matters in a more automated and trusted way has become an ever-more pressing issue.”

The company provides a “plug-and-play modular platform” that it says verifies a buyer and seller’s tax status, calculates the correct tax to charge and creates a locally compliant invoice after a transaction takes place. It also allows for automatic reporting of transactions in real time to a country’s government, where needed. 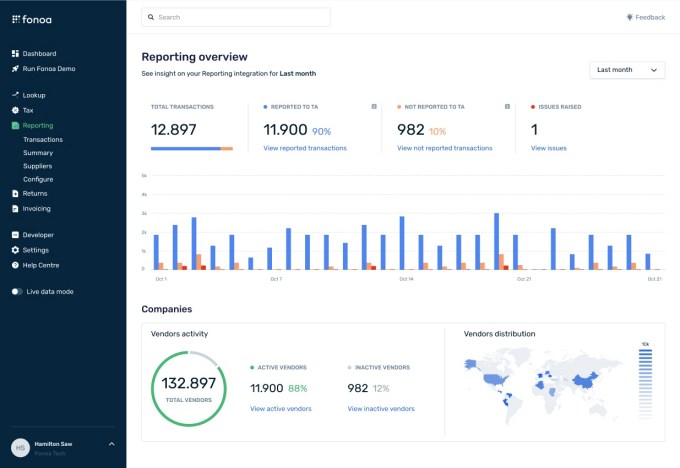 “More sales happening online means more work for us as each online transaction has to have a tax component,” he said.

The Uber alumni experienced firsthand how difficult it is to correctly calculate and report taxes to authorities throughout the world. So they set about developing technology that would automate taxes for the entire internet economy.

Fonoa currently supports tax automation transactions across more than 100 countries today and has the goal of expanding to over 140 countries by year’s end with the help of its new capital. It also plans to use the money toward hiring. Although it is based in Dublin, Fonoa — like many other startups these days — is remote-first, with a 60-person distributed team working in 15 countries. It is looking to hire another 60 people in the U.S., Europe, Asia and LatAm across engineering, product, sales, recruiting and operations. The company also plans to use the funds to extend the coverage of current products as well as “build completely new ones,” Tremac said.

“We are using all resources available to double down on growth as the opportunities ahead of us are massive,” he told TechCrunch. “We will keep expanding until we cover all relevant use cases for all of our products across all geographies.”

Hannah Seal, principal at Index Ventures, believes that Fonoa unlocks growth for companies that operate internationally, and would otherwise be “bogged down” by the complexity of national tax regimes.

“This focus on enabling growth, not simply back-office automation, attracted us to Fonoa in the first place,” Seal wrote via e-mail. “Having run Uber in multiple markets, the team has a deep understanding of the challenges of scaling across borders and has developed products that allow companies to add and expand new geographies seamlessly.”

Jambu Palaniappan, managing partner at OMERS Ventures, described Fonoa’s product as “the best and most complete offering in the market.”

“They are focused on the full tax stack from validations to real-time reporting and have put technology rather than consulting at the core of their product,” he wrote via email. “With governments around the world more concerned than ever about compliance, now is the perfect time for Fonoa to build a globally relevant platform.”

Prev Next
75 Comments
Leave A Reply