University staff vote for three days of strikes in December


Dozens of UK universities will be hit with three days of strike action at the beginning of December, as a longstanding dispute over pensions, pay and employment conditions creates further disruption for students.

The University and College Union, which represents higher education staff, announced on Tuesday that employees at 58 universities would walk out from Wednesday 1 December to Friday 3 December.

The strike is the latest in more than three years of industrial action over plans to reduce a deficit in the £80bn University Superannuation Scheme, the retirement fund for university staff, which will leave about 200,000 members with less generous pensions.

University staff are also striking over stagnating wages, high workloads and the widespread use of insecure contracts.

“University bosses refuse to revoke unnecessary, swingeing pension cuts or even to negotiate on issues like casualisation and the unbearably high workloads that blight higher education,” Grady said.

“If employers remain intent on slashing pensions and exploiting staff who have kept this sector afloat during a pandemic then campuses will face strike action before Christmas, which will escalate into spring.”

The union said it would re-ballot branches that missed the 50 per cent turnout threshold to mandate strikes in last month’s ballot for action, leaving the door open for “sustained disruption” next year. 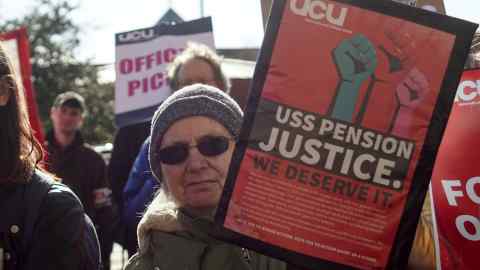 As in previous UCU ballots members voted for action at their own university, rather than nationally, with separate ballots on pay and pensions disputes.

The union has estimated that proposed changes will result in a 35 per cent cut to guaranteed pensions, and argued the estimate of the shortfall is based on a “flawed” valuation of USS made at the beginning of the Covid-19 pandemic.

Universities UK, which represents vice chancellors, said higher education institutions would act to “minimise the impact on students” and other staff. It added that staff who voted for action represented less than 10 per cent of eligible USS members.

“We have repeatedly stated [our] willingness to consult employers on any viable, affordable and implementable alternative proposal from the UCU and we remain fully committed to continuing talks to develop a joint approach to the future of the pension scheme,” it said.

“Students have a rich history of standing shoulder to shoulder with university staff, who have seen their pensions, pay and conditions slashed in recent years,” NUS president Larissa Kennedy said.

Kennedy and vice-president Hillary Gyebi-Ababio on Tuesday published an open letter calling on university leaders to “return to the negotiating table and meet UCU’s demands”.

Prev Next
12 Comments
Leave A Reply