Computer-powered hedge fund group AQR Capital Management is to remove five partners from its ranks and trim its bond arm, continuing to retrench operations after several lean years for many systematic trading strategies.

The $137bn investment group led by Clifford Asness has been a pioneer of “quantitative” investment strategies that attempt to profit from long-term market signals, rather than traditional human traders and fund managers.

AQR’s assets under management peaked at $226bn in mid-2018, but since then many of the main strategies it uses have fizzled, deflating its size and leading to several rounds of job cuts at the Greenwich, Connecticut-based hedge fund manager.

On Thursday, the firm announced internally that five of its top executives would be leaving and its bond investing side reorganised, with its struggling “long-only” fixed-income arm that started in 2014 being shuttered altogether, according to people familiar with the matter.

AQR declined to comment on the moves, but Suzanne Escousse, a partner at the firm, said in a statement: “We remain committed to systematically trading fixed income in our long-short, alternative and risk parity strategies as we have done since AQR’s inception.”

The five “principals” were Michael Katz, head of portfolio implementation; Michael Patchen, head of risk; Ari Levine, senior researcher; Scott Richardson, co-head of fixed income research; and Christopher Palazzolo, AQR’s head of responsible investments, according to people familiar with the matter. The exits will leave 38 principals at the firm.

Their departures follow the announcement earlier this year that Ronen Israel, a senior principal and 22-year veteran of AQR, would be stepping down to help start a biotechnology company. That led all of AQR’s investment team to report directly to Asness and fellow founder John Liew.

AQR manages a panoply of investment vehicles, ranging from more traditional, expensive hedge funds to cheaper, simpler funds that merely harness one of many of the market “factors” identified by academics over the years. In some respects, this involves quantifying what traditional fund managers have always done, automating it and thus doing it more cheaply. 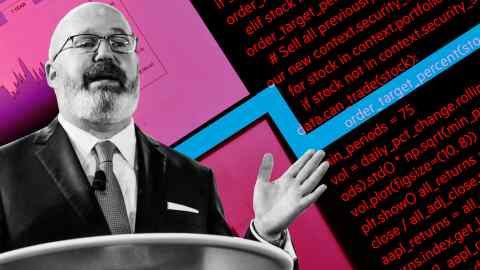 Systematically buying “value” stocks — cheap and unpopular shares that have historically yielded market-beating gains — has over the past decade suffered its deepest and longest setback, but since 2018 many of AQR’s other strategies started struggling, compounding its woes.

However, many of its main strategies started regaining traction in the last few months of 2020, and the recovery has continued. “While 2018 to 2020 was actually the toughest period I’ve seen yet, the first three months of 2021 have made for one of the strongest starts to a year we have had in our history,” Asness told the Financial Times earlier this year. “I wouldn’t be surprised if this recovery was the biggest and the longest.”

Jay Horgen, the chief executive of Affiliated Managers Group — a listed investment firm that owns a slice of AQR — indicated in a recent conference call that the turnround has continued since then. “We’re encouraged by the turn in performance at our quant managers, notably AQR,” he told analysts. “This represents an asymmetric upside to us.”

A weakened UK economy emerges from the Covid mist

Investment trusts with a greener conscience