On the road map are technology improvements and enhancements, a virtual assistant offering, and expanded community networking and meeting support initiatives.

The hybrid conference, held in Denver and broadcast virtually, had 800 in-person attendees.

“We hope 2022 gets a little less weird—2021 was a weird year,” Moore said from the XYPN Live stage during the morning keynote, referring to the way the pandemic had continued to affect the lives of both everyday Americans and member financial advisors.

While they did not parse out the number of advisor attendees, the duo did state that the network’s advisor membership had grown to more than 1,550, with 391 of them added over the past year.

“Let the blue-shirt nerd out,” was Moore’s playful introduction to his colleague and co-founder, Michael Kitces.

“Oh data, beautiful, beautiful data,” Kitces opined as he began to speak providing those in attendance with an overview of the network’s annual tracking of member data.

“Growth is happening faster because of niches,” said Kitces, who described how the data captured over the past year continues to buttress one of the network’s trends. Simply put, advisors with boutique or niche practices grow significantly faster than those without, especially during an advisor’s first four years. 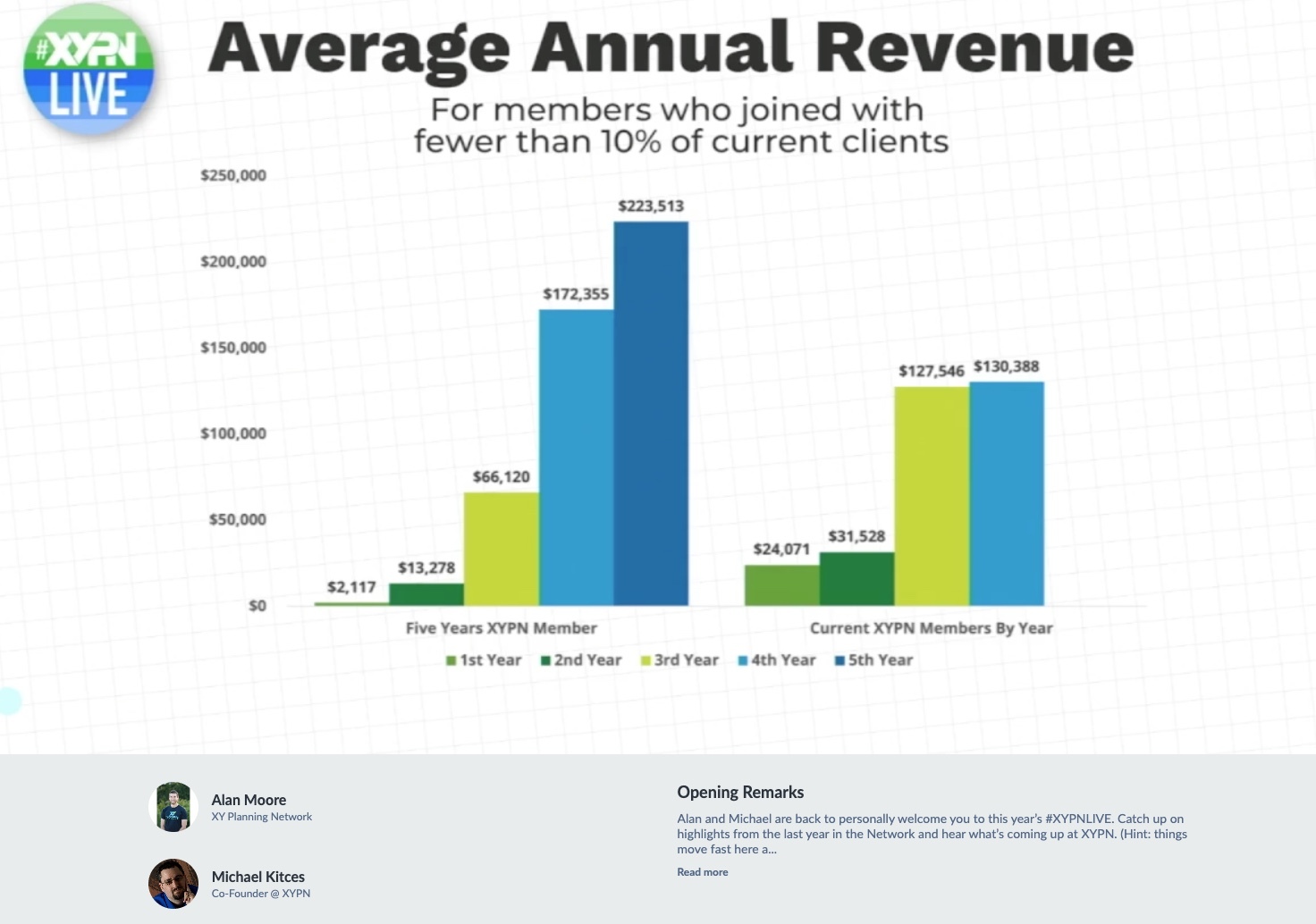 The platform for fee-based advisors plans to take a “power strip” approach to building out a technology ecosystem that “allows advisors to plug in and centralize their many services and software applications.”

Tuesday, the network announced that XYPN’s custom-built member dashboard, launched in 2020, now has single sign-on capability with four of its key tech partners: RightCapital, SmartRIA, AdvicePay and Wealthbox, with additional providers yet to come.

Specifically, the new approach will provide for the synchronization of data, and help in the triggering of workflow and processes and be built as a proprietary XYPN layer on top of existing applications.

“Functionally it is the middle layer of technology,” said Moore, adding that it is meant to help financial planning–focused advisors run their businesses and to deliver advice.

During the afternoon media call, the two co-founders also discussed that a primary goal of any capital raise, which the firm is currently exploring, would go toward expanding the firm’s core technology development team. This expansion would include both a team dedicated to building the “power strip” hub or ecosystem as well as developments dedicated to expanding specific applications, such as the network’s AdvicePay offering. 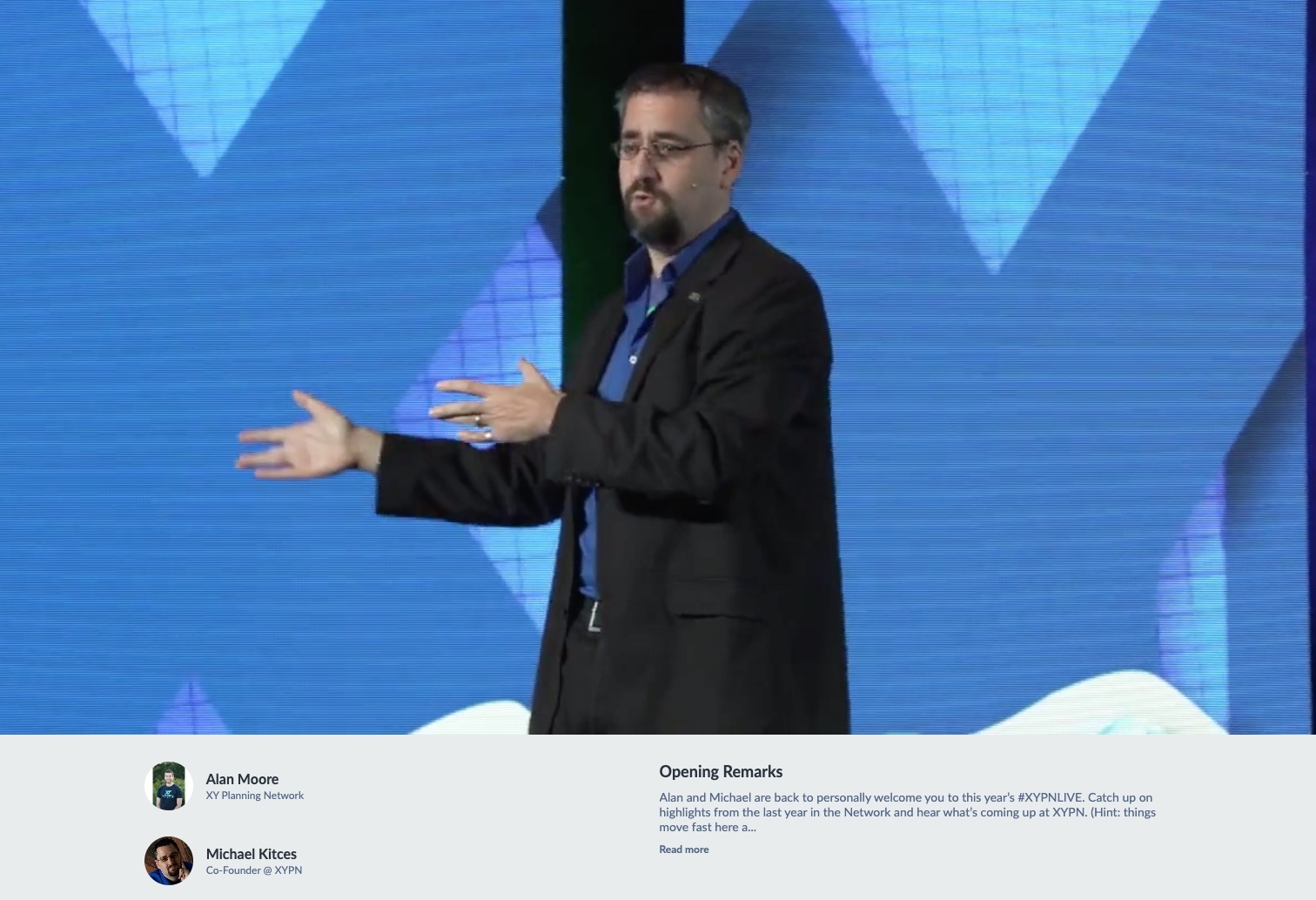 Other upcoming improvements in addition to the technology announcements include a new virtual assistant offering.

The network will begin a pilot of the virtual assistant program in early-to-mid 2022, according to the founders. That pilot, starting with a handful of members, will offer year-round coverage, including client meeting support, email management, administrative marketing support, investment operations, data entry and more.

“Being able to get support is critical,” said Moore, citing survey responses where over 50% of members were asking the network to provide some sort of virtual support offering.

In addition to the categories of help described above, the founders noted that the offering would provide advisors with other benefits, including relief from the burden of hiring and managing support employees, provide part-time help or vacation coverage for advisors, no need for training in application support (XYPN would provide core technology training).

The only down note to the morning presentation, one that was clearly a disappointment for Moore, was health care.

“We do a ton of data collection, everything is driven by member feedback, and 90% of you expressed interest in a member health benefit,” he said

“It is the most responses to a survey we have ever done, and we are working on it—and while I wish I could tell you today we had something locked in, but we are working on it,” Moore said, referring to a member health care plan. The network is hoping to have an offering to share by the end of 2021.

State Residency and Taxation for Individuals, Trusts, and Estates

JPMorgan Plans to Hire 1,300 More Advisors Over Next 3 Years